Members often ask us “how do negotiations work”? We have prepared the following information to provide an overview of the process, highlighting the importance of the physician voice in the development of the negotiating mandate and in the bargaining.

Often people think that the actual bargaining period is when negotiations start, and that is not the case. The process begins well before that, and the important work done in preparation for bargaining is critical to achieving success.

The information below provides an overview of the key steps and milestones in developing the mandate for negotiations, the bargaining, and how an agreement is approved by members. Do you have questions or suggestions after reading the article? E-mail us at negotiations@doctorsofbc.ca 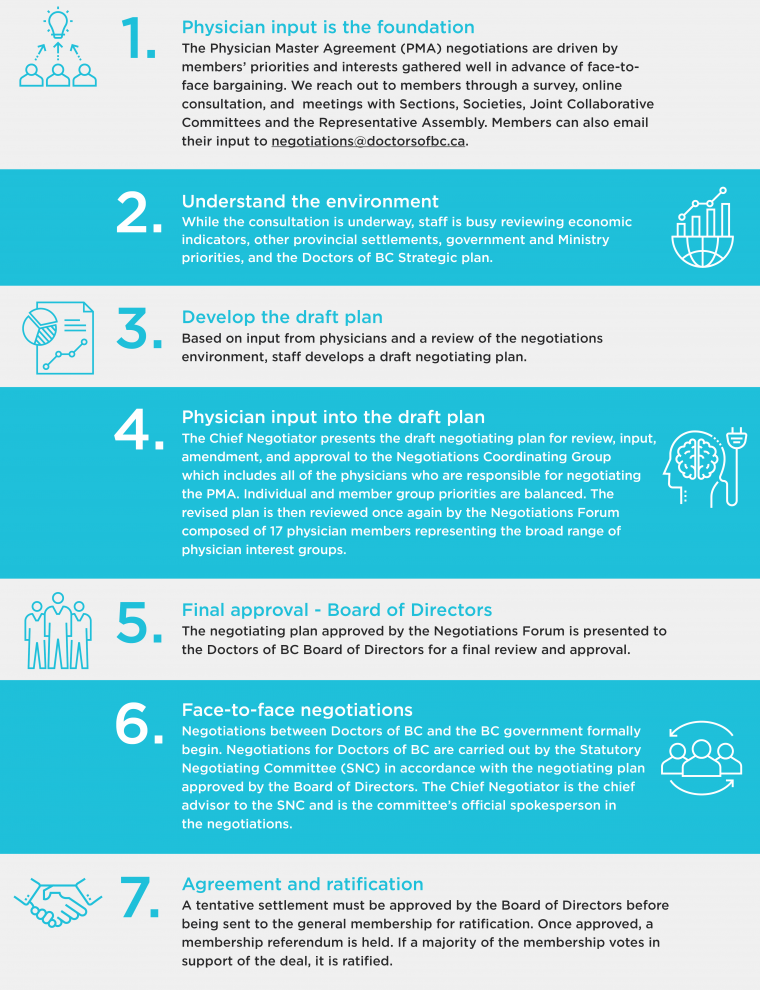 1. Physician input is the foundation  ​

PMA negotiations are driven by members’ priorities and interests. Doctors of BC starts its work well in advance of face-to-face bargaining. We gather extensive input from physicians in many different ways so that we fully understand the membership’s key priorities and concerns. For example, in our negotiations for the 2019 PMA, we consulted through:

All of the feedback from members is collected and analyzed to find recurring themes and priority areas.

While the consultation is underway, staff is busy reviewing the negotiations environment, taking into consideration factors that can impact negotiations. These include: economic indicators, other provincial settlements, government and Ministry priorities, and the Doctors of BC Strategic plan.

Once we’ve obtained physician input and assessed the negotiating environment, Doctors of BC staff work together to develop a draft negotiating plan for review by the physician committees that have the responsibility to recommend the plan to the Board of Directors.

4. Physician input into the draft plan

Once the draft negotiating plan is prepared, it is reviewed by two internal Doctors of BC Committees, also made up of physicians. This is done to ensure that it represents the interests of all physicians in BC. This requires a balancing of the priorities of individual member groups.

The Chief Negotiator presents the draft negotiating plan for review, input, amendment, and approval to the following committees:

5. Final approval - Board of Directors

Once the draft negotiating plan is endorsed by the Negotiations Forum, it is presented to the Doctors of BC Board of Directors. Approval by the Board constitutes direction to the SNC to formally begin  negotiations with the BC government.

The government and Doctors of BC generally agree to a communications/media blackout during the period of face-to-face negotiations so that each side can explore the broadest range of options to find a deal that represents both parties best interests. This is a common practice in almost all negotiations.

Once the partners reach a tentative settlement, the following steps are taken:

Do you have questions about the negotiations process? E-mail us at negotiations@doctorsofbc.ca

Are you receiving President’s Letters and our In Circulation Newsletter? If not, you may be missing important information on negotiations and other important Association news that impacts you and your practice. Click on the links to subscribe.