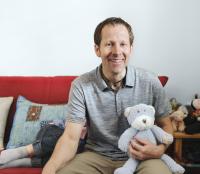 When his wife became pregnant with their second child, West Vancouver geriatrician Dr Scott Comeau decided he would do things differently the second time around.

Taking advantage of a recent change to the BCMA’s Parental Leave Program that allows male physicians to qualify for support, Comeau decided he would take the full 17 weeks of paid leave offered by the program.

“I was already planning on taking time off,” says Comeau, “but getting some income was great and let me take more time than I otherwise would have.”

Program administrator Lorie Lynch says the number of physicians taking advantage of the Parental Leave Program has grown every year. This year she expects the number will surpass 300 – with male doctors accounting for about a third of the total.

Under the program, qualified physicians can take up to 17 weeks of paid parental leave during the first year following a child’s birth. The time does not have to be taken off through consecutive weeks. Compensation is scaled to a physician’s eligible income earned in BC, to a maximum of $1,000 per week.

Although he appreciated the income provided for his parental leave, for Comeau, the real pay-off came from the experience of being with his wife during a significant time for their young family.

“I really enjoyed being there for those first few months,” says Comeau. “I took part in everything that was happening with them. It was great.”