Doctors of BC Annual General Meeting
May 28, 2021
The AGM will be held virtually through Zoom. Attendees must be members in good standing and register online in advance before 12:00 noon on May 27th...
Event Details
END_OF_DOCUMENT_TOKEN_TO_BE_REPLACED

Dreamers, Skeptics and Healers: Explore the rich history of UBC’s Faculty of Medicine

The story of BC’s medical school is a fascinating one – from humble beginnings and countless triumphs and challenges, to its current reputation as a beacon of excellence – this is a story of aspirations becoming reality, and is a testament to the hard work and collaboration of the many people who sought to make the Faculty a reality.

Dreamers, Skeptics and Healers is a new book chronicling this fascinating history of BC’s medical school. 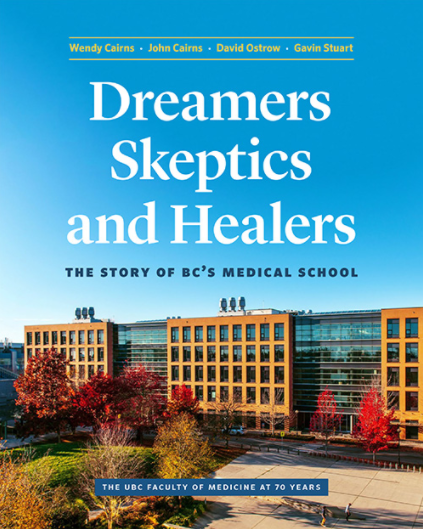 The school’s establishment was hard-won – the first aspirations emerged in 1871 when BC’s negotiating team, spearheaded by Dr John Helmcken, insisted that a medical school be included in the terms of confederation.

UBC itself was established in 1915, but it would take the hard work of many over the next 80 years for the medical school to materialize. In 1950 the first cohort of 60 medical students (selected from 270 applicants) made it to the campus on the Traditional Territory of the Musqueam people on the remote Point Grey peninsula.

Today, UBC’s medical school has more than nineteen departments, three schools, and twenty-one research institutes and centres; its distributed training and residency program branches out around the province and was the first of its kind; and it is a leader in medical and scientific research including cancer, heart and lung, chronic diseases, and population health research. Its members have earned numerous awards, including the Nobel Prize.

Reflecting on the achievements of the UBC Faculty of Medicine

In celebration of its 70th anniversary, the book’s lively vignettes, photos, and descriptions celebrate the school’s renowned teachers and visionaries, its unique and unusual architectural history, and the influential BC residents and organizations that have made it a success. It honours the school's past at a pivotal moment when the faculty is positioned to build on its success for the future.

The book is written by two former Deans of UBC’s Faculty of Medicine, Dr John Cairns and Dr Gavin Stuart; Emeritus Professor of Respirology Medicine at UBC, Dr David  Ostrow; and Wendy Cairns, Dr Cairns’ late wife, who conceived of and began writing the book more than two decades ago.

To read more about the authors, and order your copy, visit this UBC Faculty of Medicine info page.

Whether you are a doctor new to the province, a graduate of the UBC medical school, or a current student who wants to learn more about a critical period in the province’s medical history, Dreamers, Skeptics and Healers is an engaging record of medical education in British Columbia.