Since April, in the series "Doctors Making a Difference, "Doctors of BC has been profiling BC physicians going above and beyond to create better patient care or improve the medical system.

We've asked doctors to nominate their colleagues, a number of whom this spring suggested Dr Richard Wadge, a full-service GP in Surrey/North Delta. Dr Wadge was also the medical director at Fleetwood Place care home, a clinical associate professor at the University of BC medical school, as well as the chief medical examiner for Medical Council of Canada's annual Oral Structured Clinical Exam (OSCE). Nominations came from some of his hundreds of former students, who greatly respect him as a physician, educator and mentor.

Dr Wadge retired from teaching and OSCE duties in December 2017 after being diagnosed in October 2017 with ALS, amyotrophic lateral sclerosis. He passed away at a date and time of his choosing on June 13, 2018. He was 72.

We spoke to him two days before his death. We are honoured to profile Dr Wadge for this series. Dr Wadge truly made a huge difference in the lives of his medical students and patients for 47 years.

Dr Richard Wadge knew he wanted to be a doctor by age 10. He was recovering in Vancouver's old Children's Hospital from plastic surgery to remove a large birthmark on his back. The operation meant he could swim without being teased. He wasn't good at lying still and so he'd torn his sutures, requiring another procedure and a longer hospital stay.

"I was lonely, but the doctors and nurses were really kind to me. It made a huge impression," said Dr Wadge, who grew up in Vancouver as one of two sons of a traditional, reserved English father and mother. His father was 62 when he was born. "They gave us a good childhood, but it was different."

His hospital stay set a course for the rest of his life.

"There was never any question for me. When I got to university the only thing was medicine — family medicine — I wanted to do it all, cradle to grave." 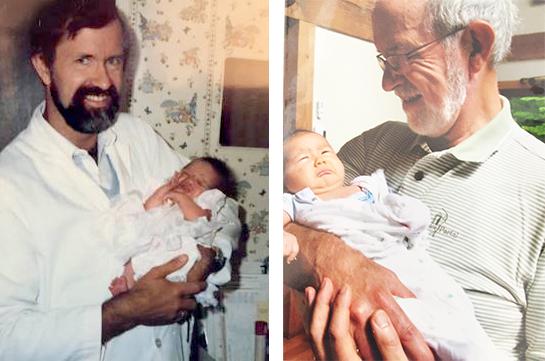 And he did. Graduating from UBC in 1970 he first joined an existing practice with two other GPs in North Delta. Medical education back then was very didactic, with little hands-on learning. On his first day in the new GP office, he gave more than 45 immunizations in the baby clinic."I had never given any shots before!" A few years later he set up his own office on Scott Rd staying there his whole career, bringing in four more doctors over the years.

As a full-service family physician, he did maternity and obstetrics, delivering upwards of 40 babies a year for 27 years; he delivered the babies of women whom he had delivered as babies. He loved obstetrics, but he especially loved caring for elderly patients, a role that increased in 2000 when he became medical director of Surrey's Fleetwood Place assisted living facility.

"I tried to give a quality of care to the elderly patients there. I tried to emphasize to attending physicians that rather than simply giving another pill, to sit down and talk with the patients and find out what was going on. Was it pain? Was it another concern? Don't just medicate!"

Teaching came naturally to him and so he began working at UBC's medical school in the early 2000s, at first with just one course, in first year, on communications with patients. By the time he retired in 2016 he was teaching four courses including the first year communications course, two second year courses, and one fourth year course. He won multiple awards for excellence in clinical teaching over the years and now a new teaching award at the medical school is named in his honour.

He loved teaching: "Just being in touch with all these amazing medical students, hopefully helping them bring the right skills and insights to their patients in the future —that is what kept me coming back." 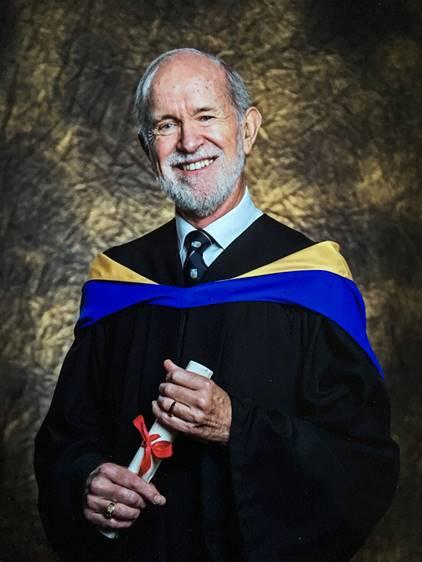 In his communications course he stressed that doctors need to take the time to listen and hear the patient's full story. "It makes such a difference to how you treat them," said Dr Wadge."I have always felt that getting somebody's story was so important. I've had many students tell me they've never forgotten that."

The second year courses were clinical exam skills —abdominal exams, ear, nose and throat exams, heart exams, and "sensitive exams" such as pelvic and breast exams in women and prostate/genital exams in men. The female sensitive exam training used professional actors, but the male exam just used plastic dummies. Dr Wadge thought that was wrong. “‘Why don't we have actors for the male exams?," he advocated. "Are they not as important?"  Soon actors were being used for male sensitive exams, too.

Training actors to perform as standardized patients for classes and for the Medical Council of Canada (MCC) Oral Structured Clinical Exams was soon a big part of Dr Wadge's role. Each year he would train some 120 actors to be realistic patients in the OCSE process, which determines if medical students had the skills to become licensed physicians. Training of the actors took two weeks before the exams. Some actors came back year after year.

"We had a blast organizing the actors. I made 120 friends," he said. As chief medical examiner, he also trained other OSCE examiners as well as made training videos. His role in the OCSE, which are held twice a year for the Canadian medical school graduates and twice a year for foreign medical graduates, was so pivotal that he got the moniker "Mr OCSE." It was a role, too, that kicked off the careers of hundreds of doctors in BC.

The symptoms of ALS came on suddenly last year. Since Christmas of 2016 he'd had some muscle twitches, fasciculations, in his upper chest — so mild they only took on importance in retrospect. In June of 2017 he had hiked long days in Britain for five weeks with Mavourneen, his wife of 50 years, with no fatigue or symptoms. In August when he tried to swim front crawl in a Penticton pool, he was alarmed:  his shoulders and arms lacked strength. He said to his wife the next morning, "It seems like my upper body is shrinking." He pushed on, returning to teaching at UBC that fall. In October he tried to change a light bulb in his home, but his hands were too weak to unscrew it.

He was referred to a neurologist a few days later. He told her: "I've always been a good diagnostician, but I want you to tell me I'm wrong." Alas, he wasn't wrong. The results of an electromylogram confirmed his fears. He was referred to the specialty ALS clinic at GF Strong by the end of October.

"I can't say enough about their ALS team. You don't feel rushed; they are compassionate; they have a sense of humour; and they also have answers to problems of daily living."

Even after his diagnosis, he continued to teach his courses at UBC last fall and ran the December MCC OSCE, training actors, telling no one but one colleague of his diagnosis at the time. He planned to continue teaching in January but realized he did not have the energy to do it. Instead, in the past six months he focused on living and saying goodbye.

"The last few months have been wonderful. I have lived a celebration of life while I'm still alive, with family, friends, actors, and colleagues. Everyone has been saying and doing lovely things. It has been tremendously sad but tremendously powerful."

Emails and messages have poured in from former students, actors and colleagues, saying messages like: "It has been such an honour, privilege and pleasure to have worked with you" ... "Because of your sincerity, knowledge, humility, humour, patience and dedication we have an incredible legacy of better doctors in BC" ... "You are one of the most inspirational people I have ever met."

As a family doctor, he cared for many patients with terminal illness over the years.  He always wished that medical aid in dying (MAID) was legally available so he could meet his patients needs to help ease their suffering and provide them with swift and pain-free deaths. "I would keep them comfortable as best I could with the skills I had, but if I could have, if it was legal, and they wanted it, I would have done it in an instant — in an instant! I was rooting for Sue Rodrigues 20 years ago."

By early June the disease was progressing rapidly, making it tougher to breathe, eat, talk, use his legs. He decided it was time to go. He scheduled MAID with Dr. Ellen Wiebe for Wednesday June 13. "I don't want to go down this road any further, you know?" He discussed his plans with calm, clear certainty.

"All the family will come around in the morning. We'll be talking and sharing in the living room. I am asking for it to be done at around 1:30 to 2 pm. About 15 minutes before I will go into my bedroom with my wife. If other family members want to come, too, that is fine, or they can stay in the living room. The doctor will inject something to make me sleep and then the other drugs will be run in using the IV."

He had a message he wanted shared with BC doctors: "This is a wonderful time to be a doctor. Medicine is on such an amazing course right now —so many expanding fields: chemical, biological, genetic, stem cells, all of that. We have better investigations, better treatment. But we must not lose our way as doctors. We have to keep sight of the patient. Patients have to be the most important part of what we do. Don't get too seduced by all the technical bells and whistles and forget about listening to and meeting the needs of the patient."

A Celebration of Life was held July 6 in Vancouver, to which more than 250 friends, family and colleagues came. "The service was so beautiful. I think it honoured my husband completely and I was very happy," said Mavourneen Wadge. 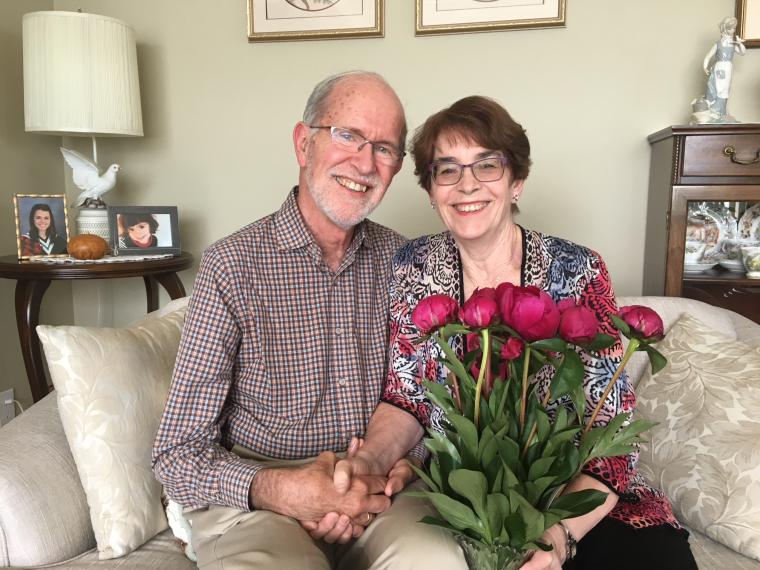